Places to visit in Nashville

The Grand Ole Opry House is located outside of Nashville at 2804 Opryland Drive.

Since 1999, the Opry returns to the Ryman every year from November to January.

Downtown is the energetic hub of Nashville’s country music scene, with crowded honky-tonk bars lining Broadway, the area’s main street. The 1892 Ryman Auditorium offers big-name concerts and backstage tours, while over in the District, the Johnny Cash Museum displays artifacts from the singer’s life. The Country Music Hall of Fame and Museum in the SoBro area features hands-on exhibits and audio tours.

Visiting the Grand Ole Opry isn’t just something you should do if you should go to Nashville. It’s something you should go to Nashville at least once in your life exclusively for. The iconic Nashville venue started as a barn dance in 1925 and grew to become one of the USA’s most beloved stages. Its stage has seen the likes of hundreds of artists over the years including Hank Williams, Johnny Cash, and Dolly Parton. Booking a post-show backstage tour is recommended for any visit. There you’ll be able to get photographs taken of you with the stars or simply with the microphones.

The Country Music Hall of fame and Museum

The Hall of Fame is in Nashville, Tennessee, and is one of the world’s largest museums and research centers dedicated to the preservation of American country music. In 1964, The museum has one of the world’s most extensive collections.
The Country Music Hall of Fame and Museum is the home of this popular American art form, safeguarding over 2.5 million artifacts, with two expansive floors of gallery space featuring permanent and exhibits. The Country Music Hall of Fame and Museum is also home to Historic RCA Studio B and Hatch Show Print. It offers three dining and four retail options, all open to the public. Closed only on Thanksgiving, Christmas Eve, and Christmas Day. 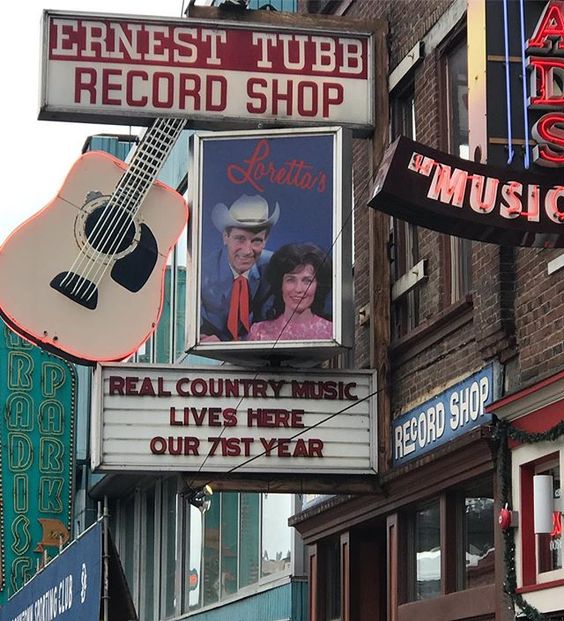 Since 1947, Ernest Tubb Record Shop has been a locally owned and operated record shop in downtown Nashville, TN. It was founded by Grand Ole Opry Ernest Tubb and his partner Charles Mosley at 720 Commerce St. on May 3, 1947, and was known for having some of the best and rarest records. With Ernest Tubb owning the record shop, he displayed a great collection of his own records. On Saturdays during the Grand Ole Opry, Tubb would promote his shop and it  became known as the Midnight Jamboree. The shop, wanting to keep a good customer base,  In 1951, the main shop was changed to 417 Broadway, which allowed them more room for their live in-store broadcasts on Saturday night. After opening the Broadway store,

‘Mom’s’ was the original name of Tootsie’s Orchid Lounge, Tootsie Bess bought Mom’s in 1960. She credits a painter with naming Tootsie’s. She came in one day to find that he had painted her place orchid…thus the name Tootsie’s Orchid Lounge.
Famous early customers were Kris Kristofferson, Faron Young, Willie Nelson, Tom T. Hall, Hank Cochran, Mel Tillis, Roger Miller, Webb Pierce, Waylon Jennings, Patsy Cline and many more. Performers at the Opry would sometimes sneak out the side door and grab a drink at Tootsie’s between sets.
In 1992, local businessman Steve Smith reinvested in Tootsies and is credited for part of the revitalization of downtown Nashville. Today, Tootsies is an international destination visited by locals and tourists alike. Tootsie’s is known for having the best local musicians and as a haven for some of the world’s most popular acts. You truly never know who you may see on one of Tootsie’s three stages or hanging out on the rooftop patio.

These are only a few highlights in Nashville, they have many museums, gift shops and tourist attractions.