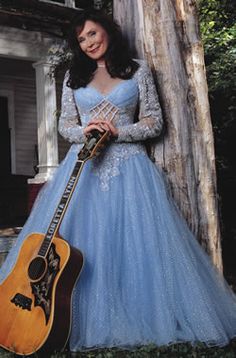 an American country music singer songwriter with multiple gold albums in a career spanning 60 years. She is famous for hits such as “You Ain’t Woman Enough (To Take My Man)“, “Don’t Come Home A-Drinkin’ (With Lovin’ on Your Mind)“, “One’s on the Way“, “Fist City” and “Coal Miner’s Daughter“.

Lynn has received numerous awards and other accolades for her groundbreaking role in country music, including awards from both the Country Music Association and Academy of Country Music as a duet partner and an individual artist. She is the most awarded female country recording artist and the only female ACM Artist of the Decade (1970s). Lynn has scored 24 No. 1 hit singles and 11 number one albums. Lynn continues to tour, appear at the Grand Ole Opry and release new albums.

Hailing from the coal-mining hills of Kentucky, Loretta, now 87, is a true rags to riches story. She married her husband Doolittle “Mooney” Lynn at a very young age, and together they peddled her music all around the country while also raising their six kids. Eventually (and with the help of friends like Patsy Cline) she became one of the boldest voices in the industry, and remains so today. 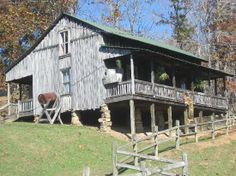 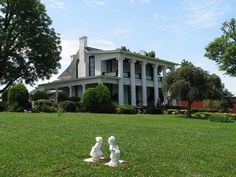 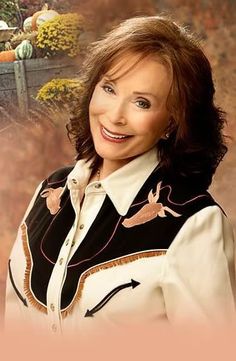 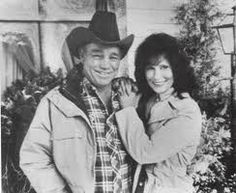 On January 10, 1948, 15-year-old Loretta Webb married Oliver Vanetta “Doolittle” Lynn (August 27, 1926 – August 22, 1996), better known as “Doolittle”, “Doo”, or “Mooney”. They had met only a month earlier.[1] The Lynns left Kentucky and moved to the logging community of Custer, Washington, when Loretta was seven months pregnant with the first of their six children.[2] The happiness and heartache of her early years of marriage would help to inspire Lynn’s songwriting. In 1953, Doolittle bought her $ 17, guitar.  She taught herself to play the instrument, and over the following three years, she worked to improve her guitar playing. With Doolittle’s encouragement, she started her own band, Loretta and the Trailblazers, with her brother Jay Lee playing lead guitar. She often appeared at Bill’s Tavern in Blaine, Washington, and the Delta Grange Hall in Custer, Washington.  She cut her first record, “I’m a Honky Tonk Girl“, in February 1960.

Loretta focused on blue-collar women’s issues with themes about cheating husbands and persistent mistresses. Her music was inspired by issues she faced in her marriage. She pushed boundaries in the conservative country music by singing about birth control (“The Pill“), repeated childbirth (“One’s on the Way“), double standards for men and women (“Rated ‘X’“), and being widowed by the draft during the Vietnam War (“Dear Uncle Sam“).

Country music radio stations often refused to play her music, banning nine of her songs, but Loretta pushed on to become one of country music’s legendary artists.

Her best-selling 1976 autobiography, Coal Miner’s Daughter, was made into an Academy Award–winning film of the same title in 1980, starring Sissy Spacek and Tommy Lee Jones. Spacek won the Academy Award for Best Actress for her role as Loretta Lynn.

Loretta has received numerous awards in country and American music. She was inducted into the Nashville Songwriters Hall of Fame in 1983, the Country Music Hall of Fame in 1988, and the Songwriters Hall of Fame in 2008, and she was honored in 2010 at the Country Music Awards. She was awarded the Presidential Medal of Freedom by President Barack Obama in 2013.  Loretta has been a member of the Grand Ole Opry since joining on September 25, 1962. Her debut appearance on the Grand Ole Opry was on October 15, 1960. Lynn has recorded 70 albums, including 54 studio albums, 15 compilation albums, and one tribute album,

1960–1966: Early country success  began singing in local clubs in the late 1950s. She later formed her own band, the Trailblazers, which included her brother Jay Lee Webb. Loretta won a wristwatch in a televised talent contest in Tacoma, Washington, hosted by Buck Owens.

The Lynns toured the country to promote the release to country stations, When the Lynns reached Nashville, the song was a hit, climbing to No. 14 on Billboard’s Country and Western chart, and Lynn began cutting demo records for the Wilburn Brothers Publishing Company. Through the Wilburns, she secured a contract with Decca Records.[16] The first Loretta Lynn Fan Club formed in November 1960. By the end of the year, Billboard magazine listed Lynn as the No. 4 Most Promising Country Female Artist. 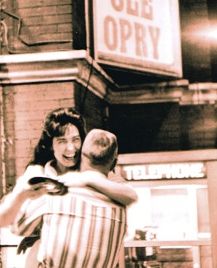 Loretta has credited Patsy Cline as her mentor and best friend during her early years in music. In 2010, when interviewed for biography of Tammy Wynette, Loretta said  having best friends in Patsy and Tammy during different times: “Best friends are like husbands. You only need one at a time.”

Lynn’s first self-penned song to crack the Top 10, 1966’s “Dear Uncle Sam“, was among the very first recordings to recount the human costs of the Vietnam War.[2] Her 1966 hit “You Ain’t Woman Enough (To Take My Man)” made Lynn the first country female recording artist to write a No. 1 hit.

Lynn’s next album, Fist City, was released in 1968. The title track became Lynn’s second No. 1 hit, as a single earlier that year, and the other single from the album, “What Kind of a Girl (Do You Think I Am)“, peaked within the top 10. In 1968, her next studio album, Your Squaw Is on the Warpath, spawned two Top 5 Country hits, including the title track and “You’ve Just Stepped In (From Stepping Out on Me)“. In 1969, her next single, “Woman of the World (Leave My World Alone)”, was Lynn’s third chart-topper, followed by a subsequent Top 10, “To Make a Man (Feel Like a Man)“. Her song “You Ain’t Woman Enough (To Take My Man)“, was an instant hit and became one of Lynn’s all-time most popular. Her career continued to be successful into the 1970s, especially following the success of her autobiographical hit “Coal Miner’s Daughter“, which peaked at No. 1 on the Billboard Country Chart in 1970. The song became her first single to chart on the Billboard Hot 100, peaking at No. 83. 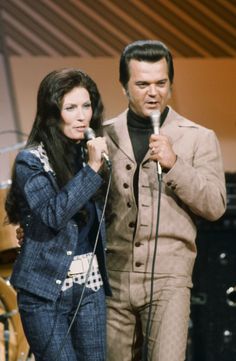 As a solo artist, Lynn continued her success in 1971, achieving her fifth No. 1 solo hit, “One’s on the Way“, She also charted with “I Wanna Be Free“, “You’re Lookin’ at Country” and in 1972’s “Here I Am Again”, all released on separate albums. The next year, she became the first country star on the cover of Newsweek. In 1972, Lynn was the first woman to be nominated and win Entertainer of the Year at the CMA awards. She won the Female Vocalist of the Year and Duo of the Year with Conway Twitty, beating out George Jones and Tammy Wynette and Porter Wagoner and Dolly Parton.

Devoted to her fans, Lynn told the editor of Salisbury, Maryland’s newspaper the reason she signed hundreds of autographs “These people are my fans… I’ll stay here until the very last one wants my autograph. Without these people, I am nobody. I love these people.” In 1979, she became the spokesperson for Procter & Gamble’s Crisco Oil. Because of her dominant hold on the 1970s, Lynn was named the “Artist of the Decade” by the Academy of Country Music. She is the only woman to win this honor.

On March 5, 1980, the film Coal Miner’s Daughter debuted in Nashville and soon became the No. 1 box office hit in the United States. The film starred Sissy Spacek as Loretta and Tommy Lee Jones as her husband, Dolittle “Mooney” Lynn. The film received seven Academy Awards“. Lynn’s last Top 10 record as a soloist was 1982’s “I Lie“, but her releases continued to chart until the end of the decade.

One of her last solo releases was “Heart Don’t Do This to Me” (1985), which reached No. 19, her last Top 20 hit. Her 1985 album Just a Woman spawned a Top 40 hit. In 1987, Lynn lent her voice to a song on k.d. lang‘s album Shadowland with country stars Kitty Wells and Brenda Lee, “Honky Tonk Angels Medley”. The album was certified gold and was Grammy nominated for the four women. Lynn’s 1988 album Who Was That Stranger would be her last solo album for a major record company as a solo artist. She was inducted into the Country Music Hall of Fame in 1988.

Loretta returned to the public eye in 1993 with a hit CD, the trio album Honky Tonk Angels, recorded with Dolly Parton and Tammy Wynette. The CD peaked at No. 6 on the Billboard Country charts and No. 42 on the Billboard Pop charts.

In 1995, Loretta was presented with the Pioneer Award at the 30th Academy of Country Music Awards. In 1996, Loretta’s husband, Oliver Vanetta “Doolittle” Lynn, died five days short of his 70th birthday.

In 2000, Loretta released her first album in several years, Still Country, in which she included “I Can’t Hear the Music”, a tribute song to her late husband. She released her first new single in more than 10 years from the album, “Country in My Genes.” The single charted on the Billboard Country singles chart and made Lynn the first woman in country music to chart singles in five decades.

In 2002, Loretta published her second autobiography, Still Woman Enough, and it became her second New York Times Best Seller, peaking in the top 10. In 2004, she published a cookbook, You’re Cookin’ It Country.

In 2004, Lynn released Van Lear Rose, the second album on which Lynn either wrote or co-wrote every song. The album was produced by Jack White .

In 2012, Lynn published her third autobiography, Honky Tonk Girl: My Life in Lyrics.[39] She contributed “Take Your Gun and Go, John” to Divided & United: Songs of the Civil War, released on November 5, 2013.

Lynn’s Christmas album White Christmas Blue was released in October 2016.[42] In December of the same year, Full Circle was nominated for Country Album of the Year for the 59th Annual Grammy Awards.[43]

Lynn’s album Wouldn’t It Be Great, the third album of her five-album deal with Legacy Recordings, was released in September 2018 after being delayed by health issues. Her health prompted Lynn to cancel all 2017 scheduled tour dates] Lynn was named Artist of a Lifetime by CMT in 2018.

On June 25, 2019, The New York Times Magazine listed Loretta Lynn among hundreds of artists whose material was reportedly destroyed in the 2008 Universal fire

On October 19, 2019, Lifetime aired the highly anticipated movie Patsy & Loretta which highlighted the friendship of Lynn and Patsy Cline. Lynn attended the Nashville release of the film.

Loretta and Doolittle “Mooney” Lynn had six children together: 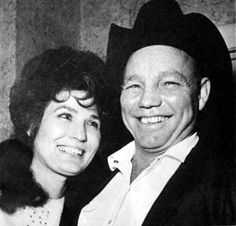 Lynn was married for almost 50 years until her husband died at age 69 in 1996. In her 2002 autobiography Still Woman Enough and in an interview with CBS News the same year, she recounted how her husband cheated on her regularly and once left her while she was giving birth.  Lynn and her husband fought frequently, but she said that “he never hit me one time that I didn’t hit him back twice.” Loretta has said that her marriage was “one of the hardest love stories.” In one of her autobiographies, she recalled:

“I married Doo, when I was but a child, and he was my life from that day on.  He thought I was something special, more special than anyone else in the world and never let me forget it.  That belief would be hard to shove out the door.  Doo was my security, safety net and just remember I’m explainin not excusin.  Doo was a good man and a hard worker, but he was an alcoholic, and it effected our marriage all the way through.”

In May 2017, Lynn had a stroke at her home in Hurricane Mills, Tennessee. She was taken to a Nashville hospital and subsequently had to cancel all of her upcoming tour dates. The release of her new album Wouldn’t It Be Great was delayed until 2018. According to her website, she is expected to make a full recovery.On January 1, 2018, Lynn fell and broke her hip. 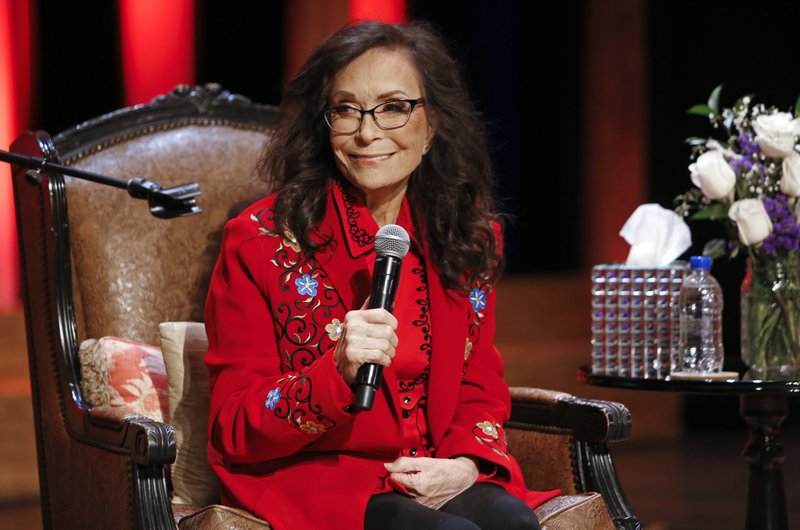